CameoComic finally got its ending

This is the shared forum for all the comic and events of the 2007 webcomic event of the Crossover Wars.
Post Reply
6 posts • Page 1 of 1

CameoComic finally got its ending

Today I finally got the last CameoComic strip, thereby completing the full storyline that was scripted during the Crossover Wars and first now is complete... almost two years delayed!

This became the last piece to complete the puzzle that became CC in the last months of the war, provided by the faithful KAM who got the honor of doing the last plugging... and seen from a cameo viewpoint, what a plug!

I wish to give my thanks to all the various artists who got together and gave their energy and skills to finish CameoComic, both during the Wars and in the weeks, months and years after, up until now... without you a cornerstone if the Wars would never have been proplerly finished...

In the spirit of CC and the Wars in general, which required the teaming up of so many artists, writers, characters and readers, I want to present this picture done by NJ Huff of Emergency Exit... her version of the last panel in this strip, symbolozing the forming of alliances and friendships made during the Wars, not only by charactes from various comics, but by the artists, writers and associated people behind... 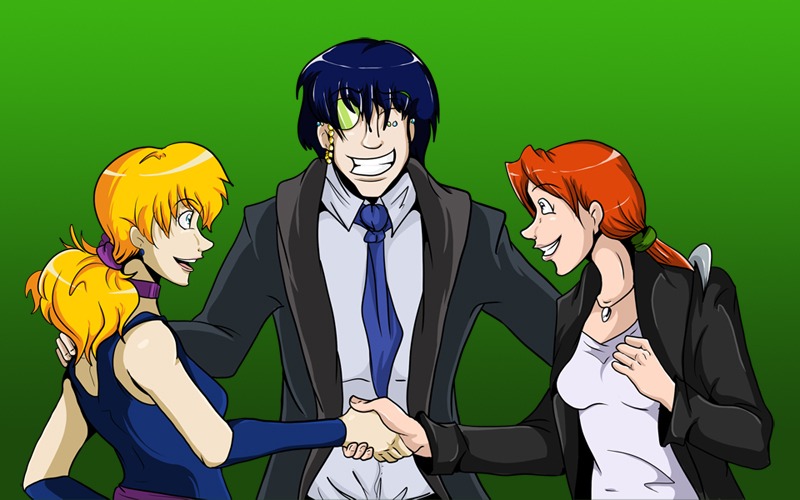 So what now? Well, the inteded run for CC during the Wars is finished, but Scale is still on the loose according to all reports, so there will soon be something new to see on the site... something old and something new, so keep an eye on it

Tow years and finally its complete... thanks again everybody, we couldn't have done it without you!

There are certain advantages to having a faceless character; really made it easy to find Author in that crowd.
I reject your reality and substitute my own.
Top

Made it easy to draw as well, Author.

*browses characters in cameo to see who is there*

Oh wow, someone remembered me? *happy*

Twas an unexpected nice treat to see in there. Thanks.

*goes back to non-existing for a bit*
Top

*snerks at the "Your Cameo Here" bit*

Actually, it's pretty much the opposite side of the frame, but who's to quibble over details?

Silliness aside, I just wish to once again congratulate Hogan, Net, Caitlin, Ti-Phil, Mravac Kid and everyone else on this. You really made the world of webcomics come alive for me and I'm honoured that I had the privilege to play a part in it.
Top
Post Reply
6 posts • Page 1 of 1